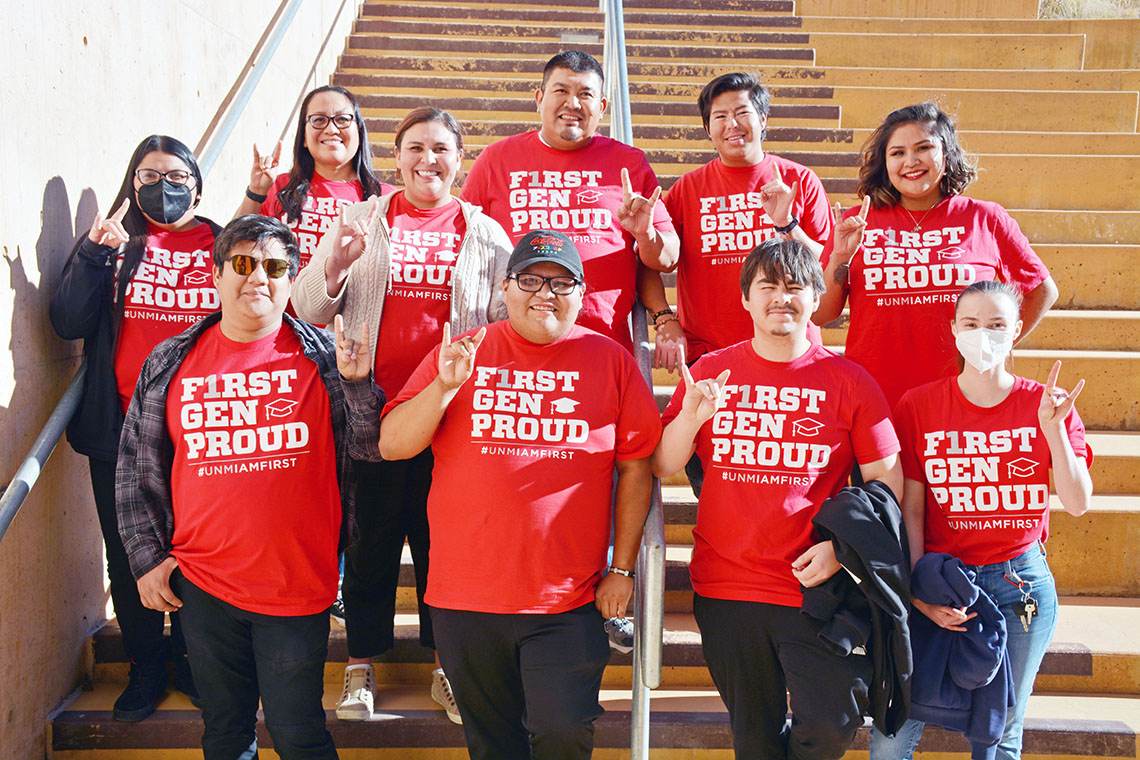 Ten of the University of New Mexico-Gallup's first-generation students pose for a group photo while wearing First Gen Proud T-shirts on the steps outside the Student Services and Technology Center in commemoration of First-Generation College Celebration Day on Nov. 8, 2022.

GALLUP, N.M. ŌĆĢ When Dewight Leupp was in high school, a teacher told him he wouldnŌĆÖt amount to anything because he has a disability, but he has big dreams for the future and is working to prove that teacher wrong.

ŌĆ£If IŌĆÖm able to get a communications degree, I hope to work close with the (Navajo) tribe and from there go into spreading awareness of disabilities,ŌĆØ he said. ŌĆ£ThereŌĆÖs hardly any programs for that.ŌĆØ

Leupp is considered to be legally blind, but he has some usable vision ŌĆö though at a certain distance, things become blurry or fuzzy.

As a Navajo tribal member himself, he feels that the Navajo Nation and other Native American tribes lack programs and resources for individuals with disabilities because of cultural taboos, so he wants to help eliminate that stigma.

He wants to use his education to in turn educate the general public about blindness and other impairments ŌĆö that way people like himself donŌĆÖt have to go out of their way to explain things to others.


ŌĆ£Just recently, last summer, I took a trip to Atlanta for SkillsUSA,ŌĆØ he said. ŌĆ£I had my white cane at the airport and I was using it for standing there while I was waiting in line for my meal, and someone asked, ŌĆśWhatŌĆÖs that stick for?ŌĆÖ So I had to explain to them.ŌĆØ

As a result of being identified legally blind, Leupp said heŌĆÖs not allowed to do certain things, such as drive a vehicle. 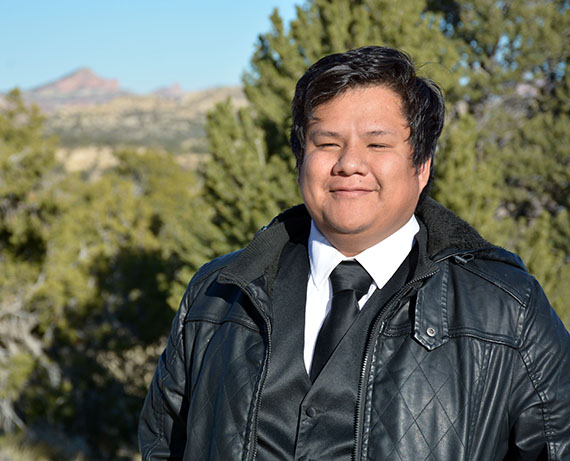 Dewight Leupp, a first-generation college student pursuing an associate degree in liberal arts, poses for a photo on The University of New Mexico-Gallup campus Nov. 16, 2022.


Since Leupp and his family live 16 miles away from town, his father, who works in Gallup, drives him to the branch campus every morning.

ThatŌĆÖs just one of the ways his family supports him.

Leupp said his parents were a major driving force in his decision to pursue a higher education. He said his mom and dad did not complete high school themselves, but they encouraged him to go to college.

ŌĆ£Particularly my mother highly emphasized education because she believes the old proverb that getting a college degree will get you a better job,ŌĆØ Leupp said.

Another source of educational motivation for Leupp was a speaker at his high school who had autism and a doctorate.

ŌĆ£That was kind of an inspiration, knowing that someone with a form of disability ŌĆö a non-physical disability but still considered a disability ŌĆö was able to achieve the highest level of a degree,ŌĆØ he said.

As the first person in his family to go to college, Leupp is considered a first-generation college student.

He joined about 30 other students, faculty and staff at UNM-Gallup Tuesday, Nov. 8, to commemorate First-Generation College Celebration Day, which honors first-gen students whose parents did not complete a four-year college or university.

Asked whether he experienced any barriers as a first-generation college student, Leupp said he was lucky and didnŌĆÖt encounter any. The New Mexico Commission for the Blind and Visually Impaired helped him make the transition from high school to college.

Then, when he first enrolled at UNM-Gallup, he received help from the branch campusŌĆÖ Accessibility Resource Center. He said the staff would check in on him and offer counseling sessions to make sure he was on track with his school work.

Leupp said he chose to enroll at UNM-Gallup because of the convenience ŌĆö it was close to home and affordable for him. He said he is enjoying his experience at the branch campus and has found it to be beneficial.

ŌĆ£IŌĆÖve gotten to know some great professors, made some good friends, joined some interesting clubs ŌĆö watched some fall ŌĆö but overall the experience has been pretty good,ŌĆØ he said.

Leupp hopes that he inspires other family members to pursue their higher education as well. He has two younger brothers ŌĆö one who is going into the military and another who is uncertain about his next steps.

ŌĆ£To me itŌĆÖs kind of exhilarating because IŌĆÖm going to be the first person in my family to have a degree and then I hope that I wonŌĆÖt be the only one,ŌĆØ he said.

He admitted that college has turned out to be tougher than he expected though. He said it really hit him during his second semester when he had a heavy course load, but he persists.

ŌĆ£I want to continue to get my degree,ŌĆØ he said. ŌĆ£I want to set an example for my extended family, especially my younger cousins. One did apply for ASU (Arizona State University), but her scholarship fell through and her dorm situation wasnŌĆÖt sorted out. Everything flopped on her. So I just want to set an example. Even though it doesnŌĆÖt work out, you can still achieve.ŌĆØ

Leupp said his decision to enroll in college was also a sort of defying act against that one high school teacher who said he wouldnŌĆÖt amount to anything.

Now, heŌĆÖs on his way toward an associate degree while also serving as president of UNM-GallupŌĆÖs SkillsUSA Chapter. He won a gold medal in the job interview category at New MexicoŌĆÖs 2022 State Leadership and Skills Competition. He then placed sixth at the national competition.

In 2023, heŌĆÖs planning to compete in the job interview category again as well as the prepared speech category.