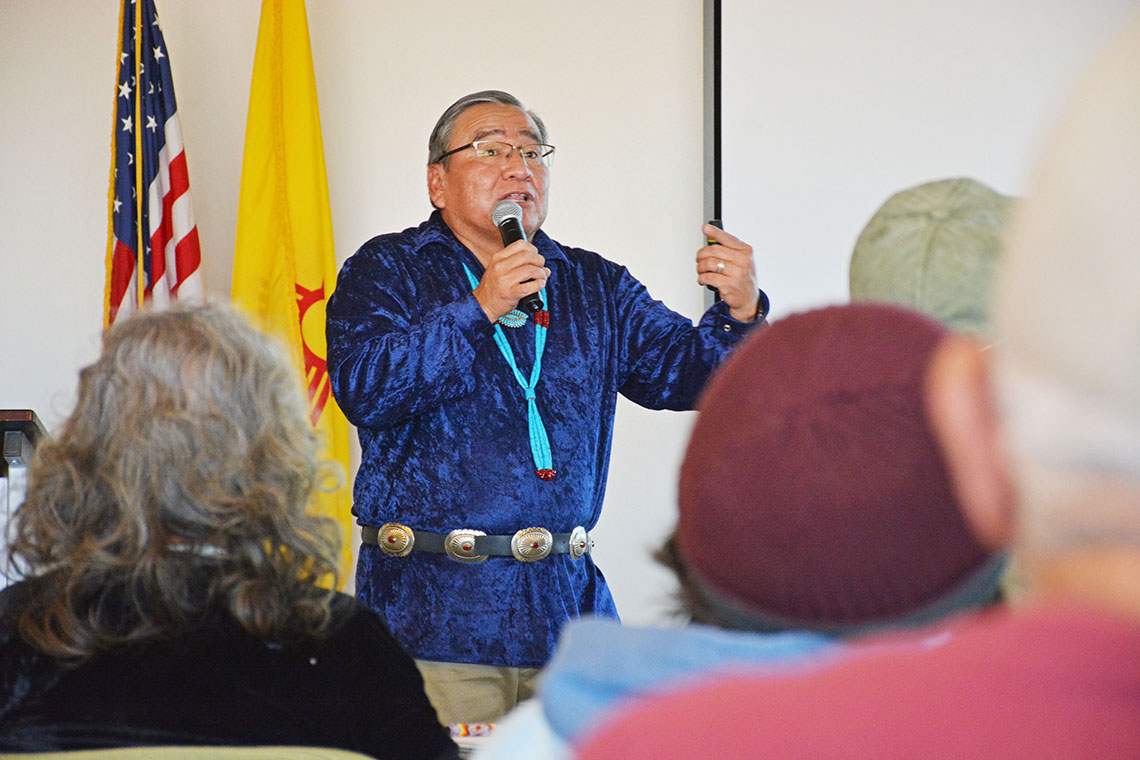 Professor Joe Kee, who teaches Navajo language and Navajo government courses, delivers a presentation on "Maintaining Native Languages" inside the Student Services and Technology Center on The University of New Mexico-Gallup campus Nov. 30.

It takes a village to revive Diné bizaad

GALLUP, N.M. ― As a professor of Navajo language, Joe Kee teaches Diné students their native tongue at The University of New Mexico-Gallup, but he acknowledges that classroom lessons on their own are not enough to keep the language alive.

During his Nov. 30 presentation entitled “Maintaining Native Languages: The Critical Foundations for Language Strength and Survival,” Kee talked about the challenges in teaching young people Diné bizaad due to historical trauma and generational gaps.

“Every day we hear Native languages are becoming critically endangered, that we're losing the language at a rapid rate, and that's very scary,” he said. “We have to work with communities. We have to work with school curriculums. That is really where it’s at. I have students who come through my classes, and I tell them, ‘T’áá Hó Ájít’éego.’ It is up to you to succeed and up to you to be a successful student.”

However, Kee emphasized that Native American students are not alone, and should not be alone, on their journey to learn their language.

Kee said Native languages are oral-based, meaning they are meant to be spoken and passed on through speaking.

Native languages tend to be spoken primarily within one’s home or one’s community. They are not widely used beyond that, but even then, language use in the home is diminishing, Kee said.

“If a language is not used, then it eventually dies,” he said. “It becomes extinct. It’s critical that language is used on an everyday basis.” 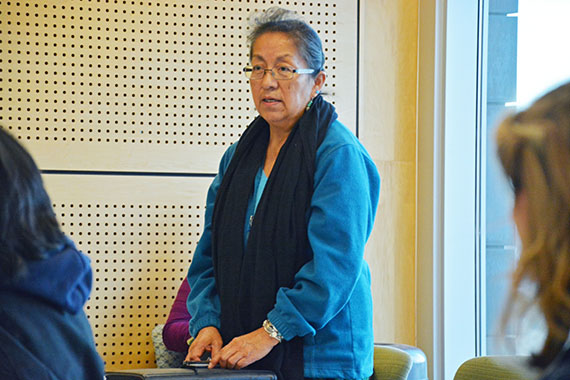 Dr. Carolene Whitman, an adjunct instructor who also teaches Navajo language courses, comments near the end of Professor Joe Kee's presentation on "Maintaining Native Languages" inside the Student Services and Technology Center on The University of New Mexico-Gallup campus Nov. 30.

Kee said there’s a sense of shame among many Diné students who come into his classroom and tell him they are unable to speak the Navajo language. Many of them shed tears.

“I let them know, ‘It's not your fault; don't blame yourself,’” Kee said. “There is a systematic history to the language loss and retention over the years.”

He explained there is a legacy of early generations who were told not to speak their language, particularly those who were forced to attend boarding schools. 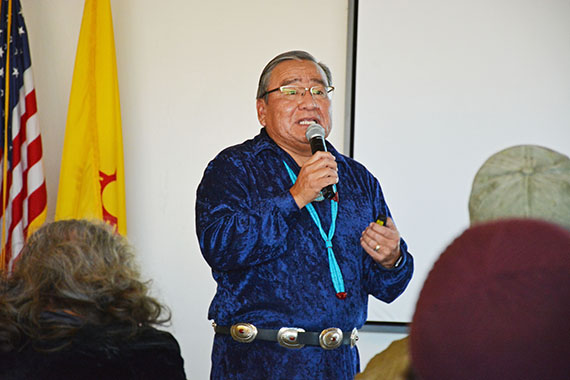 Professor Joe Kee, who teaches Navajo language and Navajo government courses, delivers a presentation on "Maintaining Native Languages" inside the Student Services and Technology Center on The University of New Mexico-Gallup campus Nov. 30.

Kee said Native children are also being told that they will not be successful if they continue to speak their language. Meanwhile, Native languages are not being incorporated into early childhood education systems or they are introduced only as elective classes.

However, he insisted a bilingual education is beneficial for students and can lead to better academic success.

“In the long term, bilingualism contributes to cognitive and social development, awareness of language, and becoming adept at problem solving,” he said. “The cultural teachings of our people can actually help these cognitive skills and build upon that. For that reason, many academic institutions are encouraged to incorporate some kind of cultural connection that their students come from.”

Kee acknowledged that language revitalization is no small feat though. He said it takes a lifetime to reverse a language shift.

“The language is very kind,” he said. “It takes care of us. It's our language that has helped even the country in our recent past. It's something that we hold to our heart, that we pray and exist because of the language we speak. It's our connection to the spiritual base, the four directions, our homes and kivas and our livestock. All parts of life are interconnected and interwoven. However, to understand the true foundational meaning of Navajo and Native, Indigenous teachings is that it takes something else when you hear it in your own Native language.”

At the end of his presentation, Kee noted he will be on sabbatical in the Spring 2023 semester working on creating a college-level Navajo language textbook that is culture-based. He will not have any classes at UNM-Gallup during that time, but he plans to return to teach Navajo language and Navajo government classes in the Fall 2023 semester.